The Phantom of Black Rock Cove

Richard Dawson became white as chalk. Even the passage of light slowed, and the sounds became as if they were muffled from a heavy blanket over someone’s face. Aside from the beating of his heart, not one muscle moved. The pounding inside beat a rhythm to the words of his assassination. The cold steel from the blunt end of a heavy steel hammer had killed his nephew! 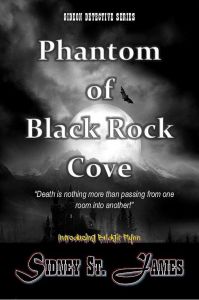 His eyes and mouth were frozen wide open in an expression of stunned surprise. His mind was sent spinning, unable to comprehend or process the images before him. The hammer entered three times on the side of the dead man’s head, leaving blood everywhere, blasting a cavity in the side of his skull as it burst crimson all about and scattered across the red long-leaf pine floors. His face, so handsome and young in life, was frozen, eyes open, mouth slack. When the sheriff came to the crime scene, the body laid like a ghoulish mannequin with blood everywhere. His face was bruised and covered with great blotches. Four of his ribs were no doubt broken as one stuck out the side. Over a half-dozen detective firms were hired to find out who the killer or killers were. Almost a year passed, and the case grew cold. Richard Dawson sent word to Portland to the famed Detective, Vincent Gideon to come and do what so many others couldn’t. Find the killer of his nephew. It wasn’t long after Gideon arrived he realized why other respectful detective agencies were not able to locate the killer. At first, the ghost was no more than a chill in the autumn air, a shimmer of mist. Through it, the trees and boulders along Brushy Creek became slightly out of focus, like a poorly taken photograph. It wasn’t until Fred Andreas got out of his car and walked down the edge of the stream did matters become more evident. The apparition wore the same clothes as the man who was killed in the bank several months earlier. For a moment all was silent, the spirit’s eyes brimming with silver tears that shone brightly in the moonlight. Fred froze, no words came forth. He took a step backward. Then, the ghoul spoke, “Who killed me?” His grin became a snarl, baring teeth like that of a wolf. He came closer without taking a step…

In the sixth novel in the Gideon Detective Series, we find the introduction of Bridgit Flynn and Casey Brennan as wanna-be detectives in this new suspense thriller!