Have you ever read your Bible and stop, go back to the beginning and read it again? Do you ever find that there is no wow. No impact. No overwhelming thought that strikes you because it is so hard to understand.

You are not alone. 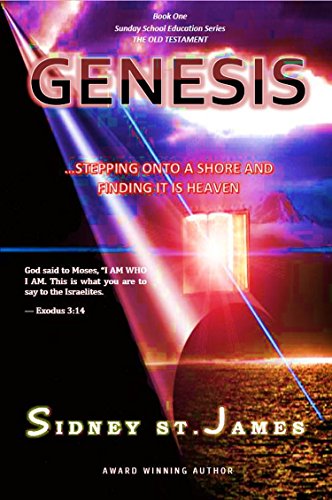 Memories growing up with my grandmother, the Reverend Ada Caston Slaton Bonds, shed a complete light on the many Books of the Bible. She was a great storyteller, just like Jesus when he spread the word of God in parables. Be it Easter, Mother’s Day, Memorial Day, Thanksgiving or Christmas, she always had a story to tell and practiced her Sunday morning sermons preaching her discourse to my brothers and me just outside Mansfield, Louisiana.

No longer do you or your children have to read the Bible until something “hits” you. My first novel in the Sunday School Series portrays a fresh approach to the scriptures…a down to earth storytelling of the words of God beginning with, well, the beginning.

The writings in the Book of Genesis have sometimes been referred to as the seed plot of the entire Bible. As complicated as it could be in scripture form, most of the major doctrines of the Bible are introduced to all of us in this so-called seed form in this book. Along with the fall of mankind, God’s promise of salvation and redemption are put in plain words in this first novel in the Sunday School Series of the Holy Book. The doctrines of creation, accusation of sin, justification, grace, faith and much more are all addressed in this Book of origins.

Almost all my life, Genesis was best explained to me in the form of a 1956 movie, Cecil B. DeMille’s, The Ten Commandments. There’s a saying today, don’t always believe what you read on the Internet or what you see on the silver screen. Hollywood told the story of Genesis, but as they always do, with a flair for capturing the attention of movie goers. It was the highest grossing film of the 1950’s and the seventh highest grossing film of all time. By the way, it has been one of my most favorite movies of all time, as well.

This initial novel captures the first Book of the Bible, Genesis, and tells the story of the beginning in straightforward and easy to understand stories. Where did we come from? Why are we here? Where are we going? GENESIS, no doubt, appeals to the theologian, the historian, the scientist, the housewife, the farmer, and the man or woman of God himself.

All in all, it is a fitting beginning for God’s story of his plan for mankind and an appropriate opening for the first book in this Sunday School Series by Sidney St. James.

Appropriate for children twelve years of age and older.